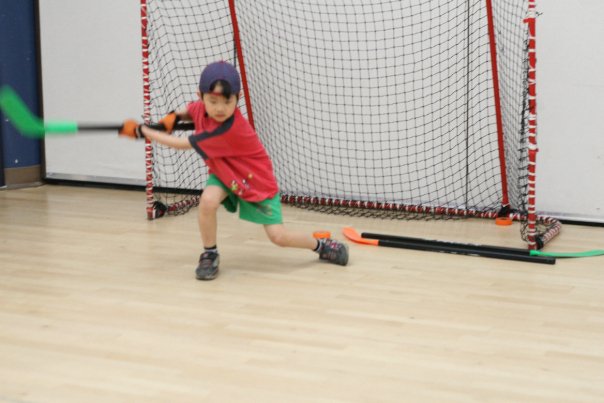 From the spectator stand on stage at the gym came the shouts, “move it! MOVE IT!” That might be the picture you would have of the over zealous parent egging their kids on at the game. You might think, “hey buddy, that’s just a game!” That’s what I’ve always thought too…until my son got involved in the Richmond Cosom Floor Hockey Association!

My older son, Evann, started to get involve when he was in grade 2 in the Mites. We thought it might be a better way for him to spend his time instead of being in front of a screen. He was a small boy for his age so tend to be out powered to the larger kids. What’s more, when he first started with game, he didn’t seem to have any idea or sense of going after the puck. He’d just seem to be standing around, waiting for the puck to come to him! So as he played more games and his team wasn’t doing as well, I might get a little over zealous and just want him to just move around! That first season, I think his team lost almost every game! But of course, that never phased him and we thought he is learning. Learning to be a team player, learning new skills, learning to win and (mostly) to loose gracefully. And most importantly, how to have FUN!

That first season was actually tough in other ways. We were still living in Vancouver while our boys were going to Richmond Christian. On practice nights, it was impractical to go home after school and then come back out for practice and we ended up eating at the local food courts at least once a week. But we stuck with it for another season. We eventually did move to Richmond which made things easier, and we kept at it year after year. That first season was 2011, and now, almost ten years later, we are still at it! It’s like when you find a good thing, you aren’t going to let it go!

Evann has certainly grown as a player, from the first season where he didn’t seem to know where he was, to the last season where he was among some of the top league players, and even starting to learn to ref, as many of his peers are learning to do. We must credit his growth to the countless volunteer coaches he had over the years. For their dedication to the game, and never let “what is” get in the way of “what could be”. And most of all, allowing the kids to have fun!

Well, this coming season promises to be a little different than the past, but we are still looking forward to getting our boys off the screen and on the gym!

Do you have a story about how you or your kids benefited from playing cosom hockey? Send them (with photos too) to webmaster@rcfha.org