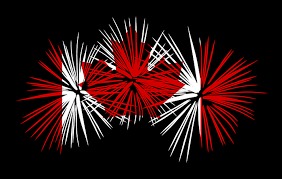 Today we celebrate the 153rd birthday of our nation of Canada. And what’s more Canadian than hockey!

But do you know, when and where hockey came from? Actually hockey’s origins are indeterminate. Indeed, the very definition of the game is at debate. Some observers accept as hockey any pastime where participants on skates use a club, or other wooden implement, to knock a ball or some such propellant about. Others say an activity cannot be recognized as hockey unless it is a contest between teams and conducted under an accepted set of rules.

The earliest recorded reference, according to the Canadian Museum of Civilization, is in the journal of Arctic explorer Sir John Franklin, where he notes that “on October 25, 1825, men from his party skated and played hockey on Great Bear Lake.”

The International Ice Hockey Federation has endorsed a longstanding Montréal claim. It is based on documented evidence, in newspapers, of a specific game between two teams of identified members and a recorded score. The match was played at the city’s Victoria Rink on March 3, 1875. No earlier descriptions of an actual game of hockey with a recorded score have ever been found. It ended, incidentally, in a brawl!

Regardless of it’s origin, there is no dispute Canada has made hockey it’s national game. Just about every boy and girl have dreams about being the next Gretzky or Wickenheiser. Does you kid have what it takes? Not sure if you’d want to make the full commitment? Or you simply just want to child to have fun playing the Canadian game? Why not try out cosom floor hockey! It’s less demanding, focus more on fun, yet the skills you learn can help you lay some solid foundations for any other levels of hockey! Richmond Cosom Floor Hockey Association, run by volunteers, with parents and players just like you, is fully committed to putting together a program that will be engaging, fun and enjoyable for all ages! Even in light of the current COVID-19 situation, just like any other professional sports, we are still committed to put together an exciting season.

Registration for the 2020/21 season will be opening in September. Watch this space and don’t miss it! You can contact president@rchfa.org if you have any questions.